Kristen Nagy, an 18-year-old from Sparta, N.J., sends and receives 500 text messages a day. But she never uses Twitter, even though it publishes similar snippets of conversations and observations.

Skip to next paragraph 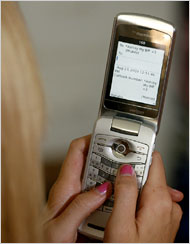 Tim Shaffer for The New York Times
Teenagers, it seems, would rather chat with close friends than tweet to the masses.

“I just think it’s weird and I don’t feel like everyone needs to know what I’m doing every second of my life,” she said.

Her reluctance to use Twitter, a feeling shared by others in her age group, has not doomed the microblogging service. Just 11 percent of its users are aged 12 to 17, according to comScore. Instead, Twitter’s unparalleled explosion in popularity has been driven by a decidedly older group. That success has shattered a widely held belief that young people lead the way to popularizing innovations.

“The traditional early-adopter model would say that teenagers or college students are really important to adoption,” said Andrew Lipsman, director of industry analysis at comScore. Teenagers, after all, drove the early growth of the social networks Facebook, MySpace and Friendster.

Twitter, however, has proved that “a site can take off in a different demographic than you expect and become very popular,” he said. “Twitter is defying the traditional model.”

In fact, though teenagers fueled the early growth of social networks, today they account for 14 percent of MySpace’s users and only 9 percent of Facebook’s. As the Web grows up, so do its users, and for many analysts, Twitter’s success represents a new model for Internet success. The notion that children are essential to a new technology’s success has proved to be largely a myth.

Adults have driven the growth of many perennially popular Web services. YouTube attracted young adults and then senior citizens before teenagers piled on. Blogger’s early user base was adults and LinkedIn has built a successful social network with professionals as its target.

The same goes for gadgets. Though video games were originally marketed for children, Nintendo Wiis quickly found their way into nursing homes. Kindle from Amazon caught on first with adults and many gadgets, like iPhones and GPS devices, are largely adult-only.

Similarly, Twitter did not attract the young trendsetters at the outset. Its growth has instead come from adults who might not have used other social sites before Twitter, said Jeremiah Owyang, an industry analyst studying social media. “Adults are just catching up to what teens have been doing for years,” he said.

Many young people, who have used Facebook since they began using the Internet and for whom text messaging is their primary method of communication, say they simply do not have a need for Twitter.

Almost everyone under 35 uses social networks, but the growth of these networks over the last year has come from older adults, according to a report from Forrester Research issued Tuesday. Use of social networking by people aged 35 to 54 grew 60 percent in the last year.

Another reason that teenagers do not use Twitter may be that their lives tend to revolve around their friends. Though Twitter’s founders originally conceived of the site as a way to stay in touch with acquaintances, it turns out that it is better for broadcasting ideas or questions and answers to the outside world or for marketing a product. It is also useful for marketing the person doing the tweeting, a need few teenagers are attuned to.

“Many people use it for professional purposes — keeping connected with industry contacts and following news,” said Evan Williams, Twitter’s co-founder and chief executive. “Because it’s a one-to-many network and most of the content is public, it works for this better than a social network that’s optimized for friend communication.”

Wendy Grazier, a mother in Arkansas, said her two teenaged daughters thought Twitter was “lame,” yet they asked her to follow teenage pop stars like Miley Cyrus and Taylor Swift on Twitter so she could report back on what the celebrities wrote. Why won’t they deign to do it themselves? “It seems more, like, professional, and not something that a teenager would do,” said 16-year-old Miranda Grazier. “I think I might join when I’m older.”

The public nature of Twitter is particularly sensitive for the under-18 set, whether because they want to hide what they are doing from their parents or, more often, because their parents restrict their interaction with strangers on the Web.

Georgia Marentis, a 14-year-old in Great Falls, Va., uses Facebook instead of Twitter because she can choose who sees her updates. “My parents wouldn’t want me to have everything going on in my life displayed for the entire world,” she said. (Of course, because of the public nature of social networks and the ease of creating a fake identity on the Web, even sites with more privacy settings have proved dangerous for young people in some cases.)

Many young people use the Web not to keep up with the issues of the day but to form and express their identities, said Andrea Forte, who studied how high school students use social media for her dissertation. (She will be an assistant professor at Drexel University in the spring.)

“Your identity on Twitter is more your ability to take an interesting conversational turn, throw an interesting bit of conversation out there. Your identity isn’t so much identified by the music you listen to and the quizzes you take,” as it is on Facebook, she said. She called Twitter “a comparatively adult kind of interaction.”

For Twitter’s future, young people’s ambivalence could be a good thing. Teenagers may be more comfortable using new technologies, but they are also notoriously fickle. Although they drove the growth of Friendster and MySpace, they then moved on from those sites to Facebook.

Perhaps Twitter’s experience will encourage Web start-ups to take a more realistic view of who uses the Web and go after a broader audience, Ms. Forte said. “Older populations are a smart thing to be thinking about, as opposed to eternally going after the 15- through 19-year-olds,” she said.

Sign in to Recommend Next Article in Technology (1 of 15) » A version of this article appeared in print on August 26, 2009, on page B1 of the New York edition.

via nytimes.com
This article does a god job of clarifying the evolution of social media and the demographics involved. Anyone who is attempting to harness the power of social media for business purposes needs to constantly work to stay abreast of the trends and articles like this by Tim Shaffer are quite helpful.

← How Did You Make Your Customers Feel?
→ Essential Plugins For Your WordPress Blog | Small Business Trends